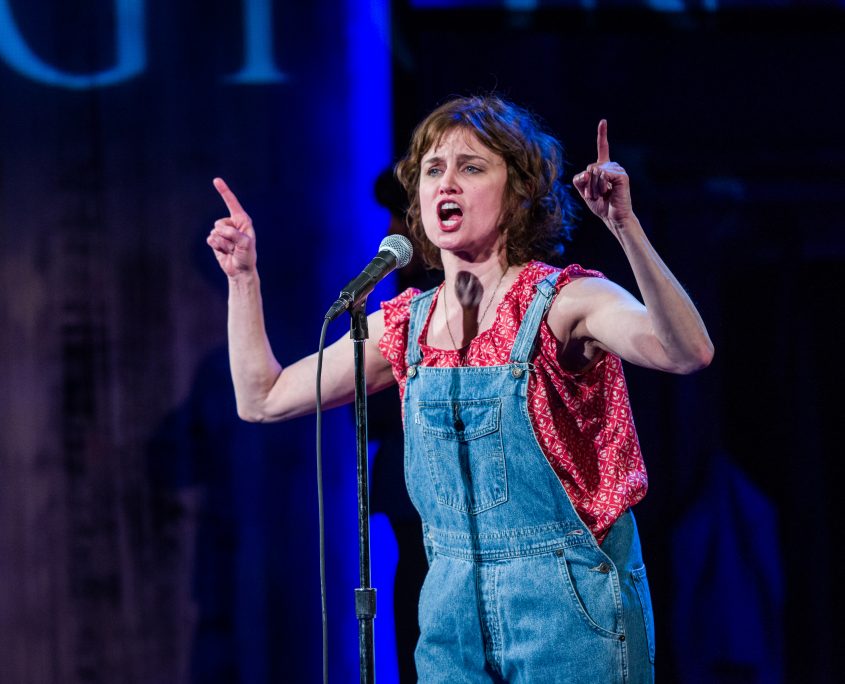 Maloney plays Norma McCorvey in Roe, and she is thrilled to be working with Mixed Blood for the first time. She graduated with a B.F.A. in Acting from Miami University. Her top Twin Cities performances are Hand to God (Jungle Theater), Stewardess! (History Theatre), A Christmas Carol, Peer Gynt (Guthrie), and Almost Equal To (Pillsbury Theatre). Her top regional performances are Quake (Actor’s Theatre of Louisville), Death of A Salesman (Dublin Theatre Festival/Guthrie), and All My Sons (Arden Theater). Her television and film appearances include Cedar Rapids and The Straight Story. She won City Pages’ Best Actress award in 2007. 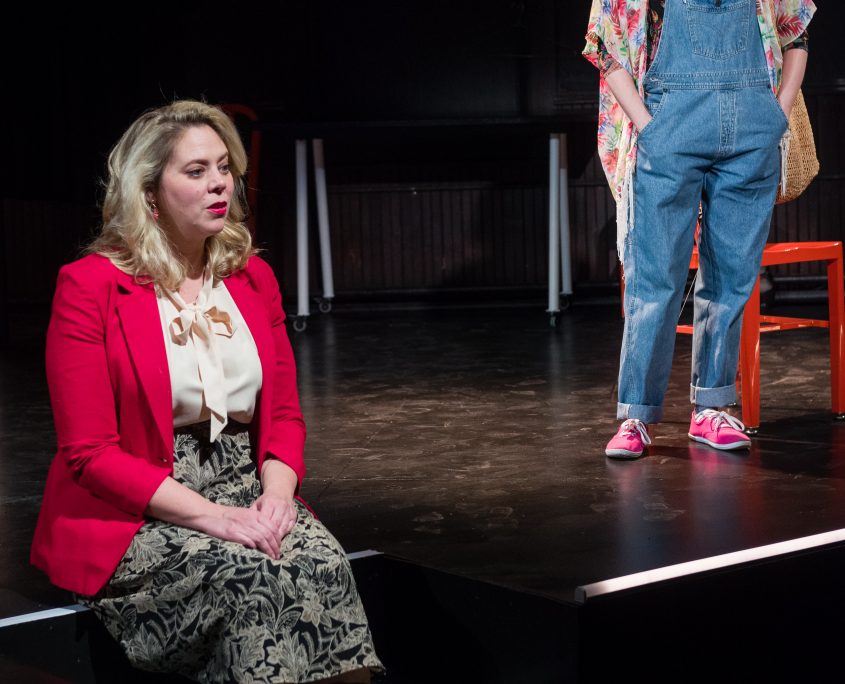 Zabel plays Sarah Weddington in Roe, and she graduated from the University of Kansas with a B.A. in Theater. Her top Twin Cities performances are Averagers, Averagers: Christmas War (Comedy Suitcase), It’s Not the Heat, It’s the Stupidity, Full Frontal (Brave New Workshop), Love, Loss & What I Wore, and Macbeth (Theatre in the Round). Her top regional performances include Crimes of the Heart and Love’s Labor Lost (Kansas City Repertory Theatre). She has been awarded the Bush Foundation Leadership Fellowship. Zabel is also the executive director of Springboard for the Arts, a community development organization that helps artists make a living and a life. 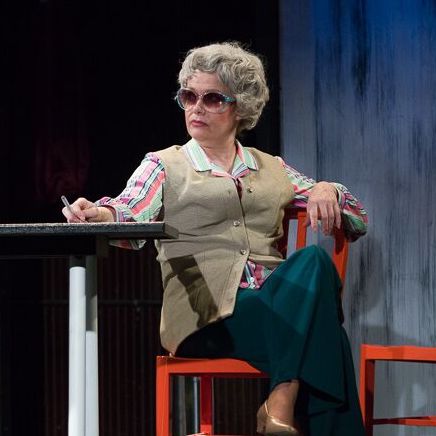 Allen plays Rhonda and is a member of the ensemble in Roe. Her past productions at Mixed Blood include Ave. Q, Learn to Be Latina, Barbecue, Because, Go Ask Alice, Hooded; or Being Black for Dummies, and Gloria. Her Twin Cities performances include The Christians (Walking Shadow), Idiot’s Delight (Girl Friday), Disenchanted, Only One Sophie (Illusion), The Pavilion, Fair Game (Yellow Tree Theatre), A Piece of My Heart (Theater Unbound), My Mother’s Lesbian Jewish Wiccan Wedding (MN Jewish Theatre), The Savannah Sipping Society (Old Log), Sisters of Swing, Christmas of Swing, Beyond the Rainbow (History Theater), Sam’s Son (Bucket Brigade), A Class Act (Minneapolis Musical Theater) Mom’s the Word, A Christmas Carol, (Actors’ Theater of MN), and Subprime (MediaBlitz at Mixed Blood). 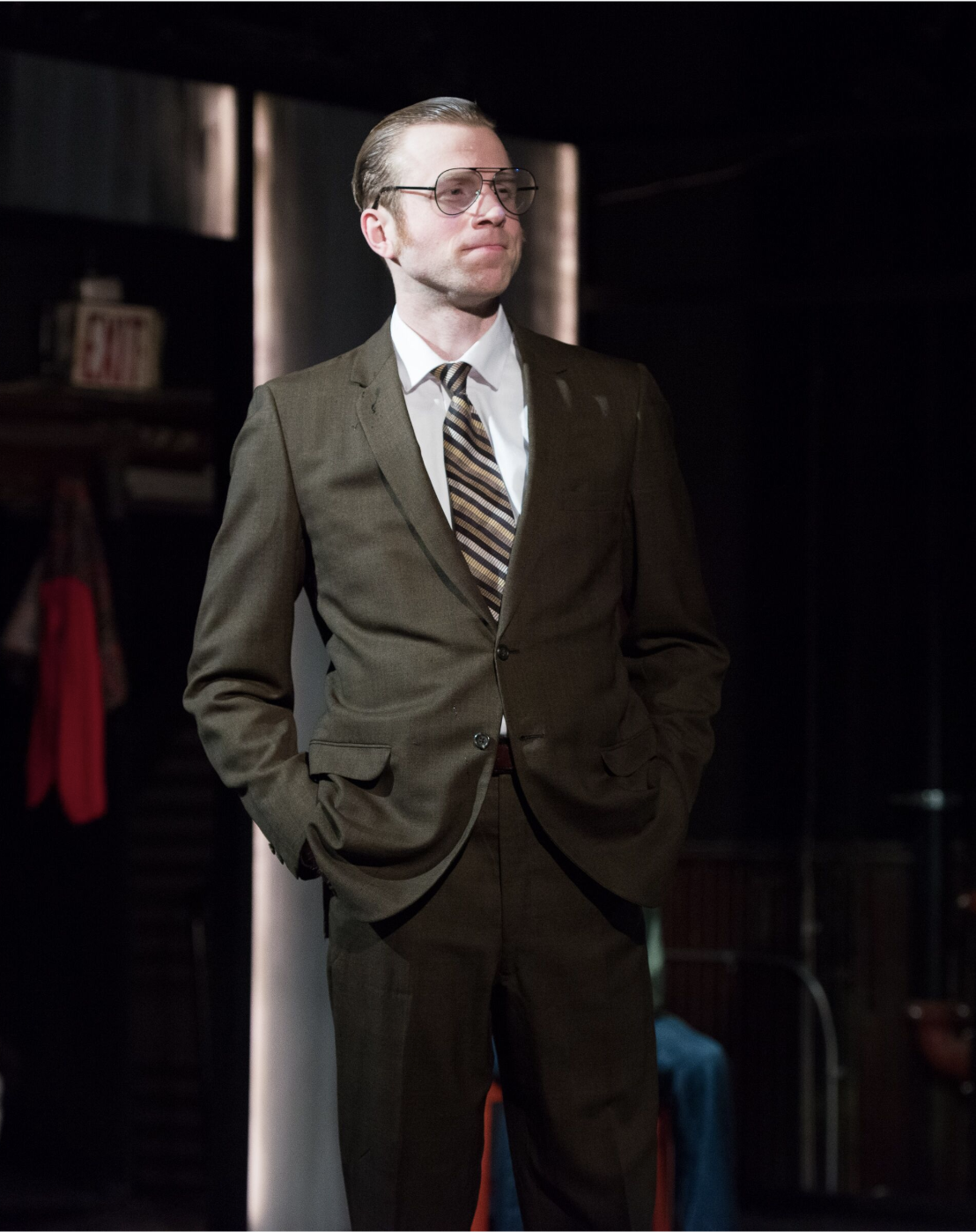 Bardwell plays McCluskey and is a member of the ensemble in Roe. He has a B.F.A. in Acting from the University of Minnesota. This is his debut show at Mixed Blood Theatre. His top performances in the Twin Cities are Lizzie Bright and the Buckminster Boy (Children’s Theatre Company), Things of Dry Hours (Frank Theatre), The Parchman Hour, We Are Proud to Present… (Guthrie), and Mary’s Wedding (Jungle Theater). Television and film appearances include In an Instant, KEON, and Sold Out. 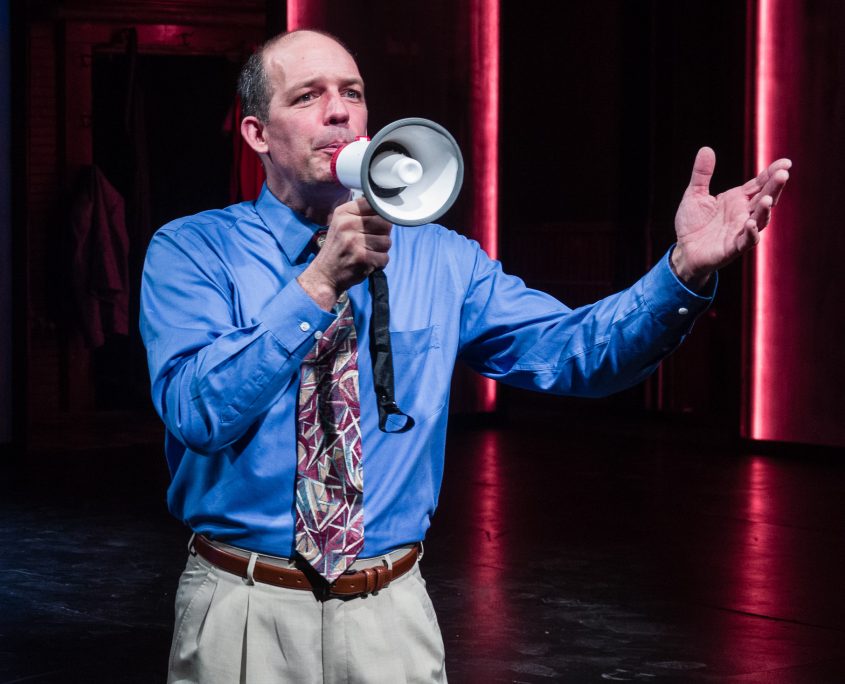 Booth plays Flip and is a member of the ensemble in Roe. He has an M.F.A. from Rutger’s University and a B.F.A. in Acting from the University of Minnesota-Duluth. His past productions at Mixed Blood Theatre include How to Use a Knife. His top performances in the Twin Cities are Stage Kiss, The Crucible, Three Sisters (Guthrie), Dial M for Murder, Shipwrecked! (Jungle Theater). Regional performances include Misalliance (Repertory Theatre of St. Louis), Triumph of Love (Cleveland Playhouse), Saint Joan, Much Ado About Nothing (Alabama Shakespeare Festival), Mississippi Nude (Berkshire Theater Festival). He has television and film appearances in Wooly Boys, A Simple Plan, This Car Up, In An Instant, and One Life to Live. Booth has been awarded the Lunt-Fontanne Ten Chimneys Fellowship. 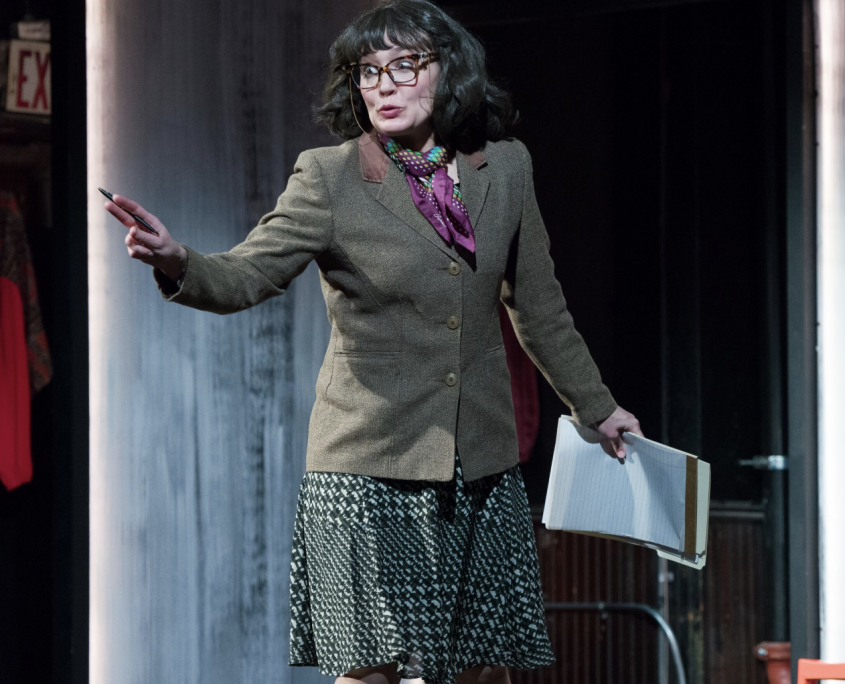 Guentzel plays Linda and is a member of the ensemble in Roe. She has a B.A. in Theater and Dance from University of Minnesota-Twin Cities. This is her debut show at Mixed Blood Theatre. Her top performances in the Twin Cities are The Children (Pillsbury House and Theatre), Dutchman (Penumbra Theatre), The Heiress (Jungle Theater), The Master Butchers Singing Club (Guthrie), and School for Lies (Park Square Theatre). She has also been in Berkeley Repertory Theatre’s Watch on the Rhine. Her awards include Star Tribune’s Best Actress (2016) and the IVEY Award for Acting in Illusion Theater’s My Antonia. 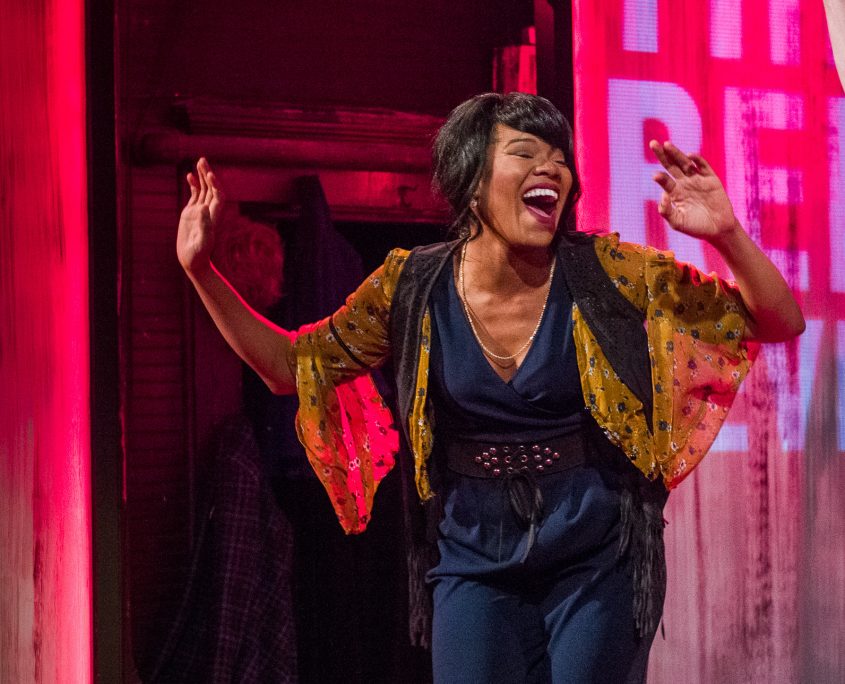 Hughes plays Aileen and is a member of the ensemble in Roe. She has an M.F.A. from CALARTS and a B.A. in Humanities from Tougaloo College. Her involvement in past productions at Mixed Blood Theatre includes Pussy Valley, An Octoroon, and Is God Is. Her top performances in the Twin Cities are Benevolence, Sunset Baby, Jitney, and Wedding Band (Penumbra Theatre). Regional performances include Is God Is (Soho Repertory Theatre), Camino Real (Boston Court), Bus Stop (Rattlestick Theater), Hurt Village (Ubuntu Theater Project), and Dot (Park Square Theatre). Television and film appearances include Arkabutla and Celebrity Ghost Stories. She has been awarded the Obie and Ivey Awards in Performance. 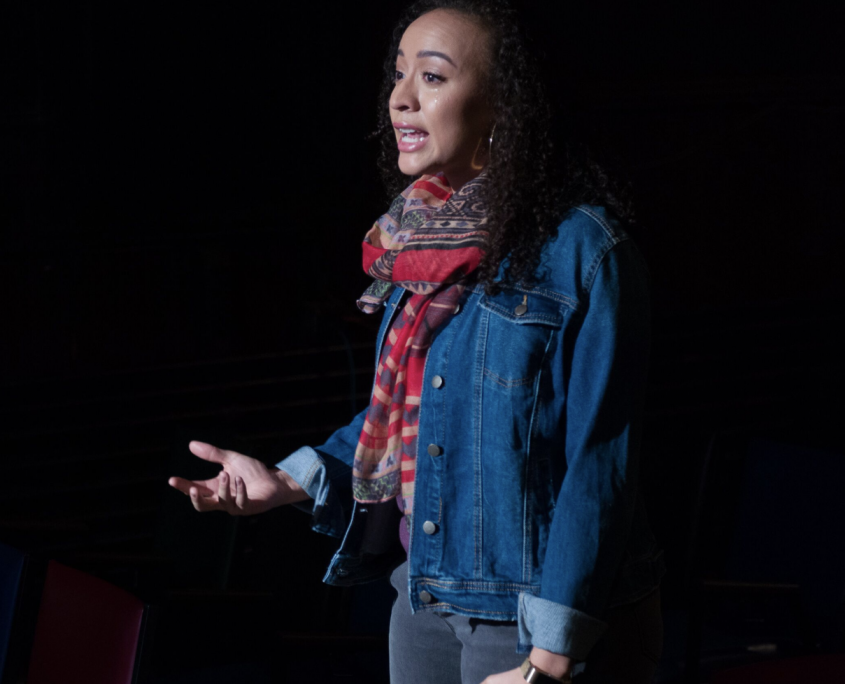 Joiner plays Roxy in Roe, and she has a B.A. in Theater Creation from the University of Minnesota. This is her debut performance at Mixed Blood Theatre. Her top performances in the Twin Cities are A Christmas Carol (Guthrie), Mary Poppins (Artistry), Antigone (Park Square Theatre), Rigoletto (Minnesota Opera), and Teen Idol: The Bobby Vee Story (History Theater). 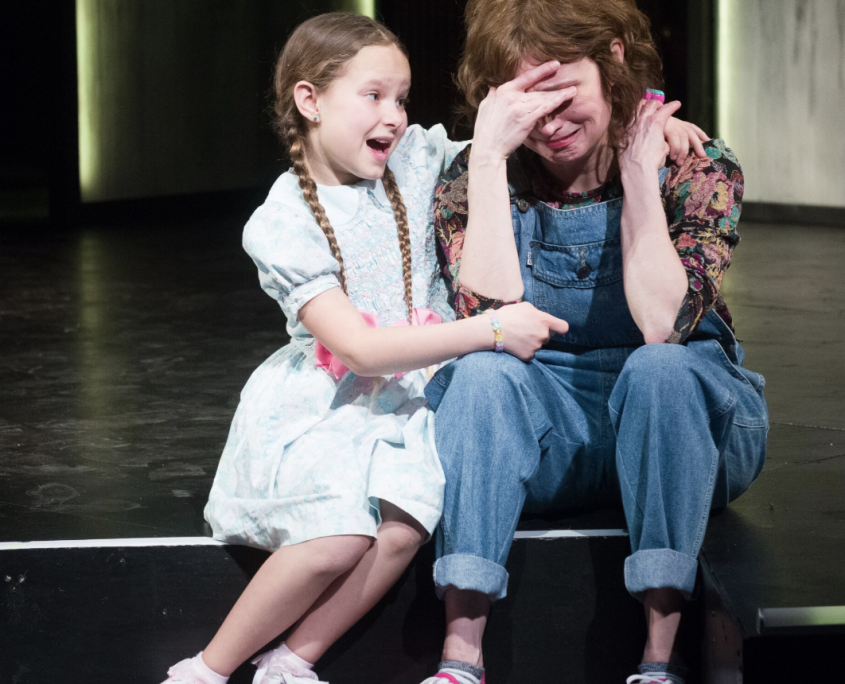 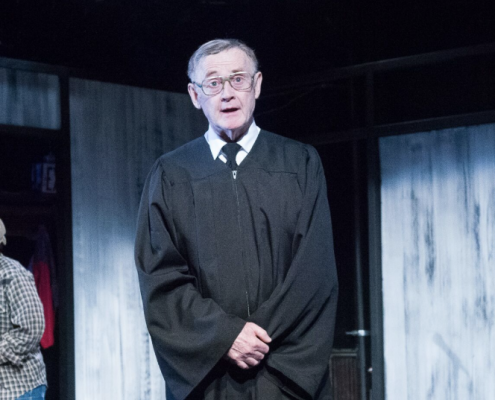 O’Brien plays Blackmun and is a member of the ensemble in Roe. He has a B.A. from the University of Wisconsin at Eau Claire. His past performances at Mixed Blood Theatre include Bleacher Bums, WARP!, Bloody Bess, Children of a Lesser God, In the Belly of the Beast, Strider, Lemons, and They’re Coming To Make It Brighter… His top performances in the Twin Cities are A Raisin in the Sun (Penumbra/Guthrie), The Sunshine Boys (Guthrie), The Rainmaker (Yellow Tree Theatre), Crimes of the Heart (Chanhassen D.T.), and Of Mice and Men (Park Square Theatre). His regional performances include A Midsummer Night’s Dream (New York Shakespeare Festival), The Tempest (Arena Stage), Twelfth Night (Shakespeare Festival L.A.), Love’s Labour’s Lost (The Old Globe), and A Man For All Seasons (New Jersey Shakespeare Festival). Television and film appearances include Monk, C.S.I., West Wing, Night Court, Sabrina the Teenage Witch, Married With Children, Larry Sanders Show, Saved By the Bell, Curious Case of Benjamin Button, Pleasantville, Stuart Little, Intolerable Cruelty, and Catch Me If You Can. He has received the Twin Cities Kudo Award and the Actor Lifetime Achievement Award from UWEC. 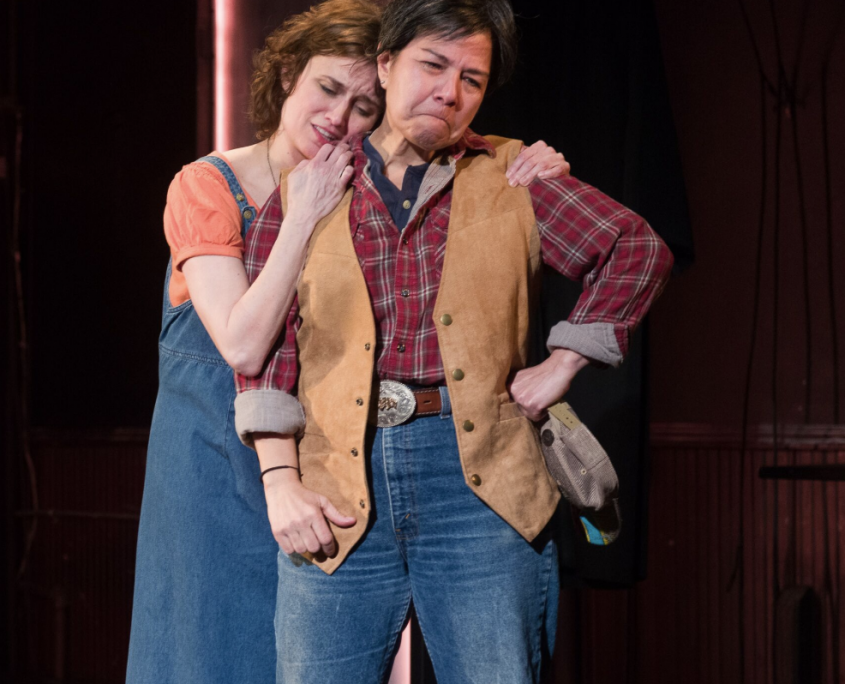 Suarez plays Connie Gonzalez in Roe, and she has a B.A. in Communication Arts from the University of Incarnate Word. She appeared in Mixed Blood’s productions of Minnecanos, Corazon Eterno (Always in My Heart), Sweet 15 (Quinceanera). Her top performances include I’ll Remember For You: An Alzheimer’s Story (Jump-Start Performance Co.), Las Nuevas Tamaleras, and Real Women Have Curves (Guadalupe Theater). Television and film appearances include From Dusk Till Dawn, The Leftovers, American Crime, Latino Americans FILM: Lodestar, and From Mexico With Love. 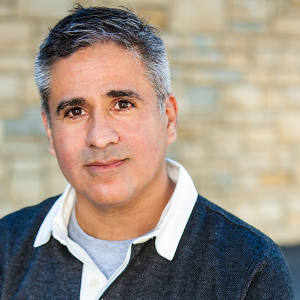 Valdez is a director, writer, and producer based in Los Angeles. Directing credits include world premiere productions by Erik Ehn, Jose Cruz Gonzalez, Peter Howard, Tom Jacobson, Will MacAdams, Tracey Scott Wilson, and others. Currently Mark is working with 15 Latino artists of various disciplines to create DJ Latinidad’s Latino Dance Party, a performance that explores latinidad in contemporary U.S. culture, through the lens of a dance party. Most recently, Valdez was the Executive Director of the Network of Ensemble Theaters (NET), a national community of artists and arts organizations dedicated to collaborative creation. Mark has led workshops and participated in numerous panels. He is the recipient of a Princess Grace Award for Directing and for Special Projects, a MAP grant, and a NALAC Artist Grant. 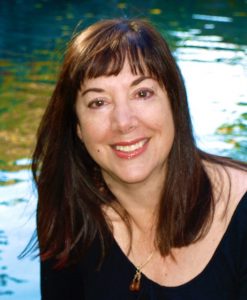 Bahr is the Costume Designer for Roe. She has an M.F.A. in Design & Technical Theater from the University of Minnesota; an M.A. in Studio Art from New York University; and a B.F.A. in Design & Technical Theater from the University of Minnesota-Duluth. Her previous work with Mixed Blood includes Go Ask Alice. Other Twin Cities productions Bahr has been involved with are Wolves, The Wickhams: Christmas at Pemberley, Hand to God (Jungle Theater), Flowers for the Room (Yellow Tree Theatre), and Understood (Trademark Theater). Regional shows include Romeo and Juliet (Cincinnati Opera), Farewell (Vail Dance Festival). She has received the Minnesota Theater Award for Exceptional Overall Production for This Bitter Earth (Penumbra Theatre).

Gustafson is the Wig Designer for Roe. She is currently pursuing a B.A. in Theatrical Design at Augsburg University. Her past productions in the Twin Cities include Wig Technician for Holiday Inn, Mama Mia (Chanhassen Dinner Theater), Hair and Makeup Artist for Thaïs, La Rondine, The Fix, and Traviata (Minnesota Opera). She was an Apprentice Wig Technician with Santa Fe Opera, where she received the 2018 Technical Apprentice Award.

Warmboe is the Properties Designer for Roe. She has worked with Mixed Blood previously on Two Mile Hollow, The Curious Incident of the Dog in the Night-Time, Vietgone, Safe at Home, Corazon Eterno, Orange, Barbecue, Charm, An Octoroon, Pussy Valley, and HIR. Warmboe has also worked with the Ordway Center, Penumbra Theatre, Ten Thousand Things Theater, Theater Latte Da, and The History Theatre. She was a 2018 Minnesota Theater Awards Honoree for Exceptional Design, received the 2017 Ivey Award for Production Design and Execution for Six Degrees of Separation (Theater Latte Da) and Overall Excellence for Ragtime (Theater Latte Da).

Mayer is the Sound Designer for Roe. He has worked with Mixed Blood previously on The Curious Incident of the Dog in the Night-Time, Vietgone, Colossal, Learn to be Latina, and Pure Confidence. He has also worked with other theaters in the Twin Cities, including History Theatre, Jungle Theater, the Guthrie, Minnesota Opera, and Park Square Theatre. Regionally, he has worked with Everyman Theatre, American Conservatory Theater, Seaglass Theatre Company, Arkansas Repertory Theatre, and Philadelphia Opera. Mayer has received the Audelco Award for Pure Confidence at 59E59 Theaters in New York City.

Patt is the Assistant Sound Designer for Roe, and she has a B.A. in Theatre Arts from the University of Minnesota. She has worked with Mixed Blood previously on the Prescient Harbingers Trilogy. Her other Twin Cities performances include Two Noble Kinsmen (Shakespearean Youth Theatre), Hamlet but Hamlet’s a Chicken (Grand Island Theatre), James and the Giant Peach JR. (Children’s Theatre Company), This Bitter Earth (Penumbra Theatre), and Hatchet Lady (Walking Shadow Theatre Company).

Patt is the Master Electrician for Roe, and he has an M.F.A. in Lighting Design from the University of Minnesota. Past productions he has worked on in the Twin Cities are The Curious Incident of the Dog in the Night-Time (Designer, SPCPA), Dear Lenny (Designer, OpenEye), I Come From Arizona (ALD, Children’s Theatre), 4 Seasons (ALD, Moving Company), and How The Grinch Stole Christmas (ALD, Children’s Theatre).

Roe, a theatrical survey of the complicated and fiery underpinnings of Roe v. Wade, the U.S. Supreme Court ruling that established a womxn’s right to an abortion. Roe precisely illustrates the fractured and fracturing history of one of the most polarizing social issues of the modern era.

Sarah Weddington was a 26-year-old lawyer when she argued Roe v. Wade and accidental heroine Norma McCorvey was a 22-year-old poor, hard-living lesbian bartender seeking to end her third pregnancy when she first agreed to be the plaintiff under the pseudonym “Jane Roe,” decades before she renounced her involvement in the case and became an anti-abortion advocate. ROE is an historically sweeping rare play that takes this inflammatory American issue head-on. Lawyer’s and plaintiff’s subsequent journeys mirrored the American divide.

ROE was commissioned by the Oregon Shakespeare Festival in 2012 as part of its American Revolutions Cycle. It was developed at the University of Texas and The Kennedy Center (as part of DC’s Women’s Voices Festival) as well as at OSF’s Black Swan Lab before it played for 70 performances in Ashland and then had runs in Washington, DC (Arena Stage), Berkeley (Berkeley Rep), and Sarasota (Asolo Rep).