imagine a u.s. without racism 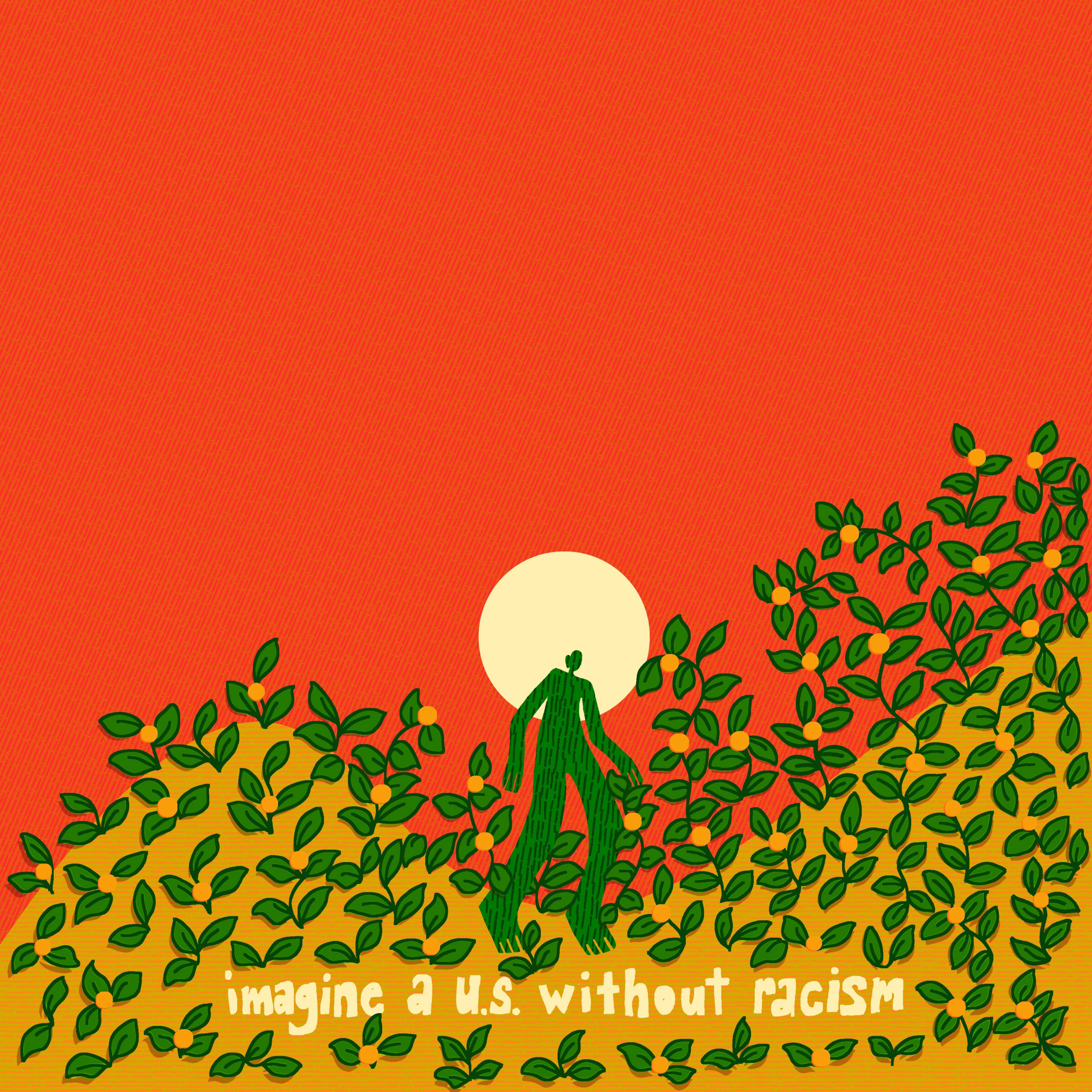 imagine a u.s. without racism responds to a series of 100 interviews with strangers across the United States. Since mid-2021, Seema Sueko has been posing the prompt, “Imagine a U.S. without racism,” to people across the spectra of age, race, ability, religion, ethnicity, gender identity, sexual orientation, political belief, vocation, and place of origin. The resulting themes and stories have become a play that tackles the (im)possible question of a truly just nation—can we make one? What would it take? What would we gain, and what would we need to relinquish?

Seven individuals find themselves in a strange, remedial class with an inexorable teacher intent on provoking their imaginations. Comic and somber, foolish and hopeful, the class clashes their way into something unexpected. Drawn from interviews with real-life people across the United States, this play-with-an-ulterior-motive transforms the impossible into the plausible.

imagine a u.s. without racism will be the final production produced by Jack Reuler in his capacity of Artistic Director of Mixed Blood, the theater he founded in 1976.

Seema Sueko (Playwright and Director) is a theater artist from Honolulu, now based in Washington, D.C., who directs stage, digital, consensus organizing, and R&D projects for theaters, think tanks, and community organizations. Her previous commissions from Mixed Blood Theatre include Messy Utopia (Ivey Award) and Hijab Tube. Previous arts leadership positions include Deputy Artistic Director of Arena Stage in Washington, D.C., Associate Artistic Director of Pasadena Playhouse, and Co-Founder and Executive Artistic Director of Mo`olelo Performing Arts Company. Some of her most recent projects include: directing Hold These Truths by Jeanne Sakata and Dear Jack, Dear Louise by Ken Ludwig in rotating repertory at Virginia Stage Company;  co-creating and directing Germantown Plays Pericles, an original, large-scale, outdoor artistic fair and performance with the community of Germantown, Philadelphia; and creating, in the early months of the 2020 global pandemic, the Arena Stage Theater Artists Marketplace, a socially-distant way to connect artists with audiences and generate income for artists. Her other R&D work includes developing the Green Theater Choices Toolkit; adapting Mike Eichler’s Consensus Organizing methodology to theater; and testing, in collaboration with researchers from University of California San Diego, whether theater builds empathy, compassion, and well-being in older adults. Their research findings were published here. Seema earned her M.A. in International Relations from the University of Chicago. She serves on the boards of Stage Directors and Choreographers Society (SDC) and the SDC Foundation. You may find more info at www.seemasueko.com.

– All patrons, including children, attending Mixed Blood performances must either show proof of full vaccination against COVID-19 (at least 14 days have passed since the final dose), or proof of a negative COVID-19 PCR test taken in the prior 72-hours. On-site testing will be available on a first-come-first-served basis before every performance.

– All patrons, regardless of vaccination status, must always wear masks over their nose and mouth while inside the venue.

– Additionally, we have entirely touchless ticketing. You will receive confirmation of your reservation, but a physical or electronic ticket will not be issued. Your reservation will be accessed at check-in by providing your name and confirming the phone number you provided during the reservation process.

– If you are feeling sick or showing any symptoms, we ask you please to stay home.

All runs of imagine a u.s. without racism will have supertitles. Audio description will be available on April 13 and afterward. On April 28 at 2 pm, we will have a show for DeafBlind interpretation, however, please email patricia@mixedblood.com to arrange interpreters. Patricia can help with other accommodations for the show with prior contact. Large print playbills will also be available upon request.

imagine a u.s. without racism previews April 8th, 9th & 10th. It opens on April 13th. Admission is free and can be reserved on a first-come-first-served basis below.

Please view the imagine a u.s. without racism playbill here.