Mixed Blood’s community ties are local, regional, national, and global. This is a function of how we strive to be a good neighbor to the more than 10,000 folks who live in the Cedar Riverside neighborhood where our firehouse is located. And it extends to the people who have seen, supported, and helped Mixed Blood create theatre to disrupt injustice by amplifying the stories of those often not heard.

Over 46 years, we’ve partnered with dozens of organizations and 7,200 artists, reaching more than 600,000 people with high-impact art.

READ MORE ABOUT OUR COMMUNITY AND COLLABORATIONS 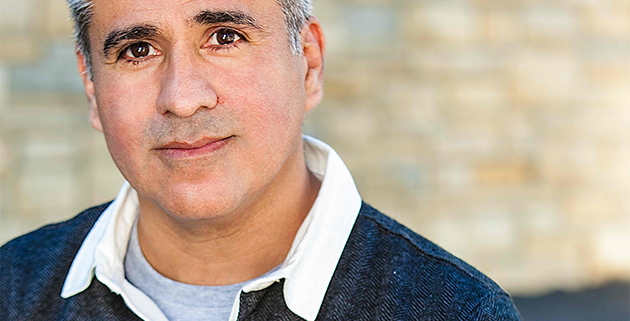 After a 20-month national search, the Mixed Blood Theatre Board of Directors is thrilled to announce that director/playwright/organizer/activist Mark Valdez will become the organization’s second artistic director.

Valdez has directed nine shows at Mixed Blood, served as a Resident Artist for two spans, and has participated in planning and producing for this progressive institution. His forté is partnering with communities, organizations, civic institutions, and others, using theatre and creative tools to address community needs and lift up community voices and stories.

“We are thrilled that Mark will become our next Artistic Director,” said Tabitha Montgomery, former Board President, Interim Managing Director, and a member of the Succession Planning Committee. “His creative dexterity, curiosity, and approach will help the organization take new strides in activating champions for equity and justice on and off the stage.”

Reuler, who founded Mixed Blood in 1976 at the age of 22, is equally enthusiastic about the choice of Valdez. “Mark has been a resident artist, guest director, playwright, organizer, advisor, confidant, and friend to Mixed Blood and me since 2006,” he says. “His belief in what theatre can be – as an art form, tool for social change, and instrument for justice – aligns with Mixed Blood’s new strategic direction and our worldview. I can’t wait to see how this progressive organization will evolve under his leadership.”

Mark Valdez has served as Associate Director of Cornerstone Theater Company, an ensemble creating play in, with, and for communities across the nation. He also headed Cornerstone’s Institute and now is its Board Chair. For seven years, he was the Executive Director of the Network of Ensemble Theatres (NET), a national alliance of artists and organizations committed to collaborative creation. He grew NET from 50 to 400 members and its budget from $60,000 to $900,000.

Valdez is this year’s recipient of SDC’s Zelda Fichandler Award, Americans for the Arts’ second Johnson Fellowship for Artists Transforming Communities, and the California Arts Council’s 2021 Legacy Artist Fellow. He was director of Mixed Blood’s production of Vietgone, which received an Ivey Award for its ensemble work in 2018. In partnership with ashley sparks, he created, wrote, and directed Mixed Blood’s most recent work, The Most Beautiful Home…Maybe, about housing insecurity. That show is slated for runs in Los Angeles, CA; Syracuse, NY; and Mesa, AZ.

Valdez has authored and directed plays for Trinity Rep, The Alliance Theatre, Native Voices, Teatro Vision, East West Players, ChildsPlay, the Center Theatre Group, and more. He has served on the board of Theatre Communications Group (TCG) and the Performing Arts Alliance as well as directed at numerous colleges and universities. He holds an MFA in directing from the University of California, Irvine.

As a consultant, Valdez has partnered with a variety of institutions interested in engagement and creative community development, including Americans for the Arts, Center for Performance and Civic Practice, Opera America, EMC Arts, LISC, the Irvine Foundation, Community Engagement and the Arts, and Arizona State University.

“Mixed Blood has been an artistic home for me, and I’ve had the privilege to see, first-hand, how the company lives its values of equity and inclusion,” said Valdez. “I am eager to build on this work. We can use the tools and skills of theatermaking—imagination, consensus building, meaning making—to support our communities and our peoples. Mixed Blood’s new strategic direction asks us do just that. This is the work I care most about and I’m lucky to have found a home in Mixed Blood that shares these priorities.”

About the Search Process